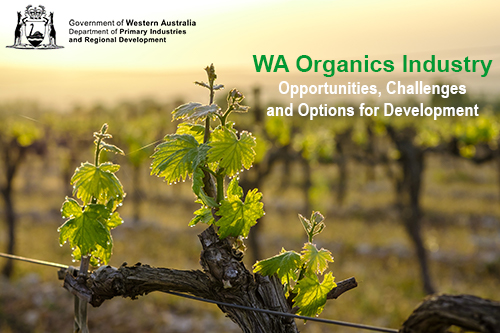 Purpose of this project

The Western Australia Department of Primary Industries and Regional Development has commissioned Policy Partners to review the indicators of maturity and quality of the Organic Industry in WA compared with benchmarks in other States.

Consequently, organic production could be viewed as significantly underdeveloped in WA, when compared with the rest of Australia.

Furthermore, Australian exports of organic products is growing at around 18 per cent annually. Consequently, WA may be missing out on significant growth potential for its agriculture industries.

Policy Partners will be engaging with industry to consider the opportunities, challenges and options for development of the WA organics industry.

Some of the challenges facing the WA organic sector could be characterised as similar to those facing conventional producers, but the issues are more intense due to the lack of scale, and there are also additional sector specific issues.

This DPIRD project is seeking a consolidated understanding and quantification of the potential opportunities for growth of organic production and processing in WA based on specific competitive advantage and industry profile.

Ultimately, we view the question as being about how the WA Government can support the organic sector to succeed in harnessing the available market opportunities, and what strategies the industry can itself adopt to succeed.

Synthesis of evidence, analysis, expert opinion, and producer perspectives will underpin this project.

Our report will focus on the insights attained from stakeholders and a strategy for improved sector performance.

We expect to undertake stakeholder engagement during July and August, including regional workshops and video conferences, targeted interviews with key players, and surveys.

Our project is expected to report in mid-October.